After about 18 months of preparation (partial demolition, reconstruction, new bearings etc) the first long strands have been stressed on Hammersmith Flyover in West London.

The 622m bridge is constructed in 2 halves, each fixed at an abutment at the end ramps with a gap in the middle to take up any thermal expansion/contraction. Since its construction in the early 1960's the internal steel cables holding the bridge together have gradually deteriorated and became so corroded that the bridge was in danger of collapse.

New (short) cables are being installed to the outside (between precast concrete blisters) and long tendons are being stressed on the inside of the flyover to keep the precast segments from falling apart. 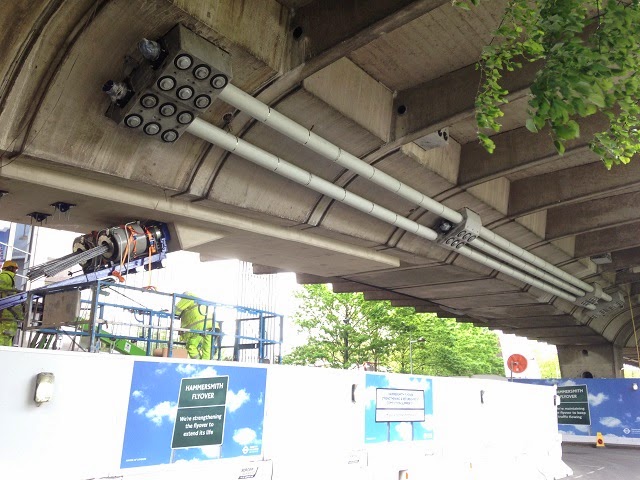 The initial jacking process will "take up some slack" and the process will be repeated again following a predefined sequence to prevent over stressing any given section..

Todays milestone sees the shorter 250m section of the bridge being shortened by approximately 20mm, about a third of the amount required for the Western half of the flyover. In total, the two bridge sections will be compressed by up to 130mm.

The replacement of the bearings underneath the 15 piers is almost complete with just 3 to go. The new bearings are more durable and have a longer travel to allow the shortening to take place.  A new expansion joint has also had to be designed to accommodate the bigger gap at the centre of the bridge.

Further details about the repairs can be found here: New Civil Engineer - February 2015